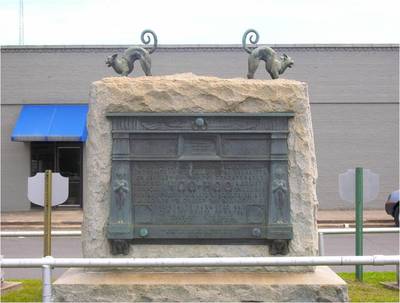 The Hoo-Hoo monument is a commemoration of the creation of the International Concatenated Order of the Hoo-Hoo, a fraternal society of lumbermen founded in Gurdon in 1892. The granite monument with bronze plaque is located near the site of the Hotel Hall where the Hoo-Hoo organization was founded. The monument was designed in the Egyptian Revival style by George Zolnay and placed in 1909. The plaque was originally affixed to Hotel Hall, but was moved to the granite marker after the building was demolished in 1927. The monument is a rare Arkansas work by Zolnay.

Founded in 1892, the Concatenated Order of Hoo-Hoo is a fraternal organization of lumbermen and those in trades related to the lumber industry. Hoo-Hoo is the oldest industrial fraternal organization in the United States. At the height of the organization’s popularity, membership totaled more than 13,000. The order was established on January 21, 1892, when six men saw a need for an organization to promote unity and fellowship among lumbermen. The group chose as its mascot a black cat with its tail curved into the number nine, which is placed on the top of the monument.

Two elements make up the present-day monument. The base of the monument is an ashlar-faced barre granite stone measuring 116 inches high, 107 inches wide and forty-four inches deep. The second element of the monument, and that which makes it of historic significance, is a bronze plaque sculpted by noted artist George J. Zolnay. The second horizontal level of the monument contains a relief of the Hotel Hall. The third level contains an inscription recounting the founding of Hoo-Hoo. The names of all Hoo-Hoo presidents are engraved on the opposite side of the base and on two small granite monuments at each side. The monument was added to the National Register of Historic Places on September 2, 1999.