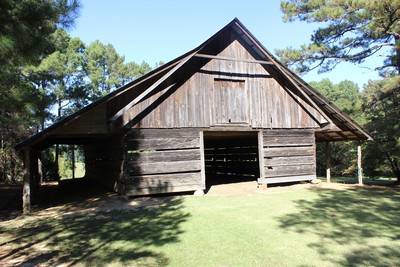 The Rose Dale Plantation Barn sat on the property of Joseph Allen Whitaker who moved to what is now Clark County (then Dallas County) due to his wife Rebecca’s health. After suffering depression from the deaths of her two infants children the doctor suggested a change of scenery for the Whitakers, and the family moved from North Carolina to Arkansas. Under the architect, Madison Griffin, a grand plantation home was built. There were large oaks planted, blossoming magnolia trees, cedars that lined the drive, and of course a magnificent rose garden. Colonel Whitaker even imported peacocks to “adorn the balcony”. The estate’s value was estimated at $110,000 with twenty three mature slaves housed in ten cabins. Whitaker was seen as a very wealthy planter even after the damage of the Civil War. The family supported the confederacy and supported the efforts through paying taxes because he was too old to go and fight.

Soon after the war ended in 1865 Rebecca became very sick with tuberculosis. Her dying wish was to be taken home to North Carolina. She spent the last six weeks of her life there and was placed in a vault above ground rather than being buried, which was her greatest fear. Shortly after Joseph Allen, now sixty-one, remarried a woman named Betty Amy. A few years after the birth of their firstborn the family of three took a trip to North Carolina and it was reported that Whitaker was in a driving accident that left him with a fatal injury. He died and was remembered as a gentlemen of the old south. Betty Amy gave birth to their second child just months after his death and named her “Miss Joseph Allen Whitaker” in memory of her father. Her nickname was Jodie. Betty Amy remarried a man named James Strong and they continued to live at the Rose Dale Plantation. The family history of the barn and plantation is also significant because it is the family line of Amy Jean Greene, the founder of the Clark County Historical Association.

The plantation was destroyed by fire in 1886. The only bit remaining was the barn. They rebuilt the home, however it again burned down in 1919. Again, the barn remained. The barn itself was restored by Ron McDowell. It was moved when it was susceptible to demolition. It is historically significant because of the large size compared to other log structures found in history. It is over 150 years old and is the largest known such structure in Arkansas. The architect, Madison Griffin, also built the plantation home. It has a unique design that almost alludes itself to “Lincoln Logs.” Its home is now a few miles down off of Old Military Road in Clark County.