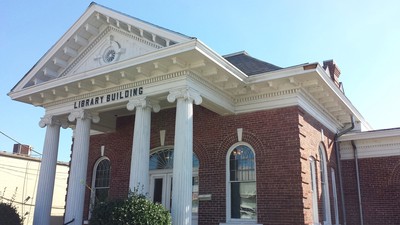 The Woman’s Library Association (WLA) began in Clark County in 1897, following a meeting of the state federation of Women’s Clubs in Little Rock, where Arkadelphia sent thirty delegates that year. Their mission, albeit simple, proved to be no simple undertaking: to start a library that would benefit the local community.

Following the events in Little Rock, a meeting was called at the home of Mrs. J.W. Patterson, where officers were elected and they moved forward with the idea of a public library. First, they collected book donations from within the community, just to have an initial selection. The first librarians (Mrs. S.R. McNutt and Mrs. Myal Green, respectively) kept the books at their homes, while saving to rent an area for the library, and then while saving to furnish the recently obtained headquarters. Several initial locations existed, with one being the current site of Southern Bancorp (previously Elk Horn Bank). As time went on, the leaders decided a permanent facility would be more appropriate, given the increase in interest in the library. Architect Charles L. Thompson of Little Rock provided the blueprint, and James Pullen constructed the current classically themed structure in 1903 on the donated lot.

The library was paid off in 1913, merely ten years after its original construction. Documented thoroughly in local papers at the time and subsequent recollections was the citywide celebration that occurred when the final $500 had been paid off. The fundraising efforts were certainly unique including a “Worlds Fair,” fiddle contests, bazaars, and the like.

In 1939 the current library became officially a part of the Clark County system, and took on the dual role of city and county library. In 1974 it was placed on the National Register of Historic Places, and the current site on Caddo Street still features the original classical style, popular at the time of construction.