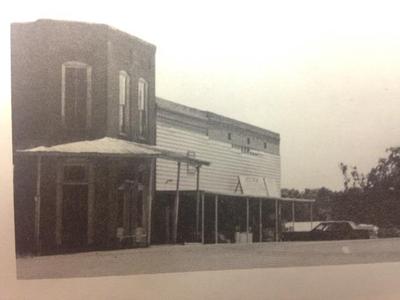 The Old Bank of Amity, built in 1906-1907, is located on West Thompson Street of the Amity square in Clark County. It is a unique two story, corner, red brick structure with Italian influences, such as the arches above the windows. This building is the best representation of a two story commercial building in the Amity area, which is why it was added to the national registry of historic places in the 1990’s.

The Project was headed by Mr. M.D. Lowe who owned a brick plant down the road in Gurdon. The establishment of a bank in Amity took place before the actual structure was built in 1905 for $20,000 and $25 a stock share. The need for a bank in Amity arose after the settlement of the area by Mr. William F. Browning, who opened up a general store. This brought more settlers to the area and the beginning of many family businesses. Th railroads also reached Amity during this time, encouraging economic growth. The increase economy and population called for a bank.

After the initial structure was built, W.C. Hayes became the president. His family was well known and he was a prominent member of the Amity society. He was a founding member of the masonic lodge and a strong member of the Methodist church. Ferrar Newberry even featured his enthusiasm for the Amity area in one of his articles. W.C Hayes’ daughter Cleta married W.H. Olds and they ran the bank for many years after Hayes’ passing. During this time they rented out the top floor of the structure to a dentist and a lawyer. The bank was in business until 1976 when a larger and more modern building was needed. The old bank itself remained in the possession of the Olds until their passing. The building now sits vacant.