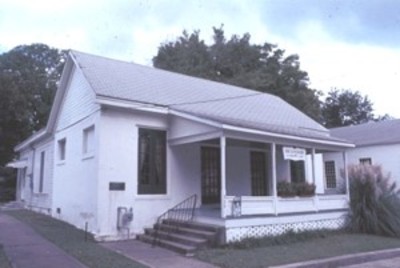 Harris Flanagin was born on November 3, 1817 in Roadstown, New Jersey. Flanagin had a big love for books when he was growing up and he finally got to use that love of books and learning at age eighteen when he was given the opportunity to be an assistant teacher at a seminary in Frankfort, Pennsylvania. Flanagin then went on to study law in Pennsylvania and Illinois before moving to Greenville, Arkansas, in 1839 to practice law.

The law office originally only consisted of two brick rooms with a porch extending across the rooms with an entrance from the west of the porch. There were no doors between the rooms, only outside doors which opened to the porch. Each room had a chimney and a fire place. The brick walls were 8 inches thick and plastered strips of lathing covered the interior walls and ceiling.

Harris Flanagin and J.L. Witherspoon were both Whigs, and after the party decline both became loyal democrats who sided with the Confederacy. Flanagin was elected as a representative to the State Legislature in 1842, and became State Senator in 1848. In 1851, he married Martha Nash and a few years later he became Major Witherspoon’s law partner. Flanagin was at a camp in Knoxville, Tennessee, when he was informed that he was elected as the confederate governor of Arkansas. He was officially inaugurated on November 15, 1862. After the Civil War was over both men practiced law and used the small building as their office.

A few years later, Governor Flanagin bought the law office from Major Witherspoon. The Flanagin Law Office changed hands a number of times. When Flanagin died in 1874, his son, Duncan Flanagin inherited his office. Duncan added a frame addition at the back and rented the property as a residence. In 1903, he sold the building to Judge John Crawford, who practiced law there until his death in 1930. The office then passed to Crawford’s son, Dwight, until he died in 1968 and the office went to his widow, Mrs. Kathleen Crawford. Then Kathleen passed it on to her daughter, Margaret Crawford Kauffman. Mrs. Kauffman then rented it to Judge Earnest Still until Judge Still died. The law office remained vacant for a short while after Judge Still died. Then in 1974, Judge Bob Sanders bought the building and he is still the owner today. Sanders has restored the office and added a back section for his own personal office.

The structure is significant because it is one of the oldest law office still standing west of the Mississippi River. As an office of a former Arkansas governor, the Flanagin Law Office is a piece of pride and joy for the town of Arkadelphia.