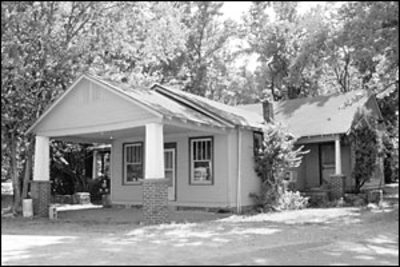 The C. E. Thompson General Store served the public for nearly fifty years providing food, supplies, gas, and a front porch where locals could sit and visit.The building still standing at the junction of Highway 8 leading to Amity, Arkansas, and Highway 26 leading to Hollywood, Arkansas, was built in 1936 “in the country,” just outside the city limit to replace an earlier general store on the same site. The building itself was built by the Thompson family. This building is one of the few Craftsman-style residences left in Arkadelphia, Arkansas . At the time it was constructed several outbuildings were also built that include a garage, well house, wash house/smokehouse, warehouse/shop, and a shed. The warehouse/shop was used to repair machinery used at the mill as well as to store supplies used in the general store.

The store sold general food supplies such as milk, butter, eggs, bread, sugar, flour, food, etc. Also available from the store was “short” which was finely ground corn that was mixed with water and used to feed hogs. The location of the store insured that the residents of its rural area had access to groceries and gasoline.

In 1903 the first car made its appearance in Arkadelphia Arkansas. By 1910, approximately twenty residents owned cars. In 1912 the owners of the Arkadelphia Hardware Company accepted a contract to sell cars. Because of this, the need for gasoline grew. Some of the first gas stations in Arkadelphia resulted from the installation of pumps on the curbside. It was 1920 before the first drive-in service station appeared in town. According to local historian Wayne McAfee in his article, “The ‘Honk-Honk’ Comes to Town: Early Days of the Automobile in Arkadelphia,” Mr. Johnson built the first drive-in service station in Arkadelphia. This station had a restroom to accommodate the ladies and a garage for maintenance work. At the station one could have their car repainted and one could purchase Texaco gasoline, Republic tires, and Willard batteries.

Bob Thompson, the owner’s grandson, believes that the very first business contracted to sell gas was Continental Oil Company (CONOCO). The first gasoline pumps used at the store were gravity pumps. Throughout the years various companies supplied gas to this rural store, those include Conoco, Phillips 66, Cities Services, and Texaco. The Thompson General Store sold gas until the 1980s, when like many stores, it was necessary to have the underground tanks removed due to environmental hazards resulting from the unstable underground tanks.